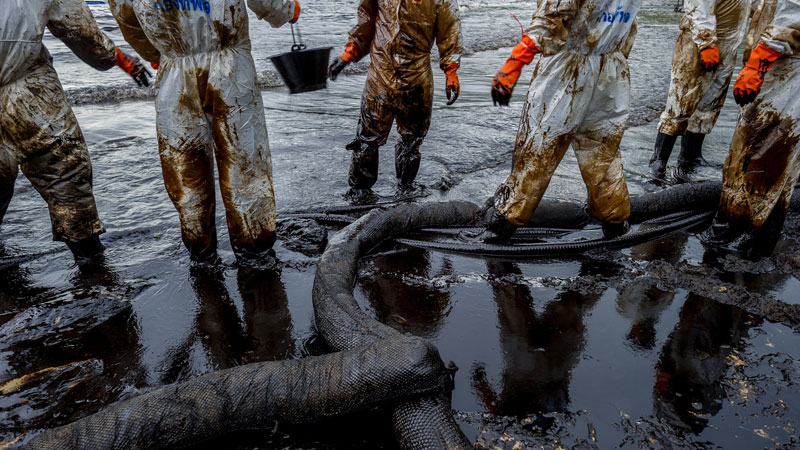 A site contaminated by an oil spill is replete with hazardous gases and chemicals. People in the vicinity of the site and staff working to contain the oil spill are at risk of developing eye, skin, or respiratory irritations, tremors, confusion, unconsciousness, etc. Long-term exposure to these harmful chemicals can cause cancer, and liver, lung, and kidney disease, among various other health hazards.

An oil spill response requires trained personnel and equipment to contain and recover the oil spillage. Ignorance can be dangerous in such a situation.

The following 3 paraments are essential for an effective response that minimizes the risk, and effectively contains and recovers the spill.

A Tailored Response
An oil spill response must be tailored to the surroundings and the readily available equipment. There are major differences in the response to an oil spill near a grassland and one in an urban area.

Farms and Grasslands
Farms and grasslands are characterized by an abundance of open soil and small plants. The primary concern is to stop the oil from leaching into the soil. Oil can block plants’ access to water and choke them. Other possible dangers include the contamination of underground water and nearby water bodies.

Here, berms and trenches can be used to contain the spill. However, they are not a permanent solution, as the risk of oil seeping into the underground water still remains.

Surface soil can be removed using liquid vacuum systems and skimmers, and the contaminated soil can be mechanically removed. Other methods like sorbents and in-situ burning can be used as needed.

Urban Areas
Populous areas like towns and cities present a different set of challenges. The primary responses include building a safe perimeter and containing the spill. Transportation accidents in urban areas can obstruct traffic, which also needs to be managed by trained staff.

Apart from potential contamination of groundwater and streams, there’s a risk that oil will runoff into the sewage system. The spilled oil must be recovered quickly using sorbents, liquid vacuum systems, or skimmers.

The Proper Equipment
Different types of equipment are used to contain and remove an oil spill. Here is the most common inland oil spill response equipment:

A Trained Response Team
An oil-spill response team consists of highly trained individuals who are well-versed with using the equipment, guiding other people to safety, and managing dangerous situations.

The team is trained to quickly contain the spill and limit the damage. Once the spill is contained, a speedy recovery can be made.

Untrained responders put themselves and others in potential danger. For example, trying to contain a crude oil spill high in benzene components without protective equipment can expose a person to the risk of cancer.

How to Respond in an Emergency
When an accident causes an oil spill, remember that oil is highly flammable. Shut down any source of heat and ignition to prevent a fire. Oil can also cause skin, eye, respiratory, and gastronomic irritation. If the fumes from the oil present a health hazard, the area should be contained.

Alert others about the spill as soon as possible. There may be someone who is trained at the site who can respond. It’s best to have a facility response plan ready.